Have you ever heard about the Irish Elk? It was one of the largest species of deer to ever exist, and stood up to 7 feet high at its shoulder alone! Impressive, hey? Sadly, they became extinct, with the last ones dying out in Ireland around 11,000 years ago. In this article, we plan to uncover more about these fantastic beasts, where they came from and where they went. And we’d love to hear what you think!

Although nobody alive today has been lucky enough to see the Irish elk in all its glory, thanks to a number of well-preserved skeletons and fossils, we have a pretty accurate idea of what they would have looked like in their prime. As previously mentioned, the Irish elk was one of the largest deer species to ever exist. The average animal would have stood at about 2.1 m (6 ft 11 in) tall at the shoulders.

We also know that the Irish elk carried the largest antlers of any known deer. There has been evidence enough to show us that these impressive antlers would have spanned a maximum of 3.65 m (12.0 ft) from tip to tip and could have weighed up to an enormous 40 kg (88 lb) in weight. Imagine how strong the Irish elk must have been to be carrying that weight around on its head all day!

With a body size of around 450–600 kg (990–1,300 lb)  on average, but actually, up to 700 kg (1,500 lb) or more at the upper end, the Irish elk was the heaviest known cervine (cervine is the technical term for the “Old World deer”) and the third-largest known deer, after the extinct Cervalces latifrons and Cervalces scotti. Irish elk bucks were notably larger than does.

Some other features of the Irish elk skeletons that have allowed them to be recognised include: 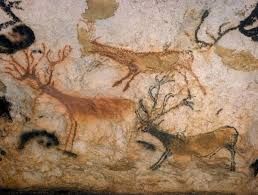 Based on Upper Palaeolithic cave paintings, it is believed that the Irish elk had an overall light colouration. These early pictures also show a dark stripe running along their backs, a stripe on either side from shoulder to haunch, a dark collar on the throat and a dark hump between the shoulder blades.

There are two proposed theories surrounding the purpose of this hump on the Irish elk’s withers. One of these is that it was used to store fat. Localising fat rather than evenly distributing it may have prevented overheating while running or in a rut during the summer.

The other theory was proposed by American palaeontologist Dale Guthrie in 1989. He suggested that, like bison, the hump allowed a higher hinging action of the front legs to increase stride length while running.

The Irish elk is considered to be cursorial, which means it is adapted for running and stamina, and has often been noted to physically resembled reindeer.

Where did the Irish Elk live?

This might sound like a trick question! Obviously, they lived in Ireland. They were named the Irish Elk due to the fact that well-preserved fossils of the giant deer are especially common in lake sediments and peat bogs across Ireland. But they were not exclusive to Ireland, and in fact, actually roamed of other countries in their day too.

With the Irish Elk having roamed all the way from the Atlantic Ocean in the West to Lake Baikal, Siberia, in the East, it has been sometimes wondered why they never ventured northwards onto the open mammoth steppe. Our best guess is that they preferred the boreal steppe-woodland environments, consisting of scattered spruce and pine, as well as low-lying herbs and shrubs including grasses.

The discovery of the Irish Elk

Antlers of the extinct Irish Elk

The first discovery of the remains of the Irish Elk stumped the scientific community. It was initially believed that what they had stumbled across was reindeer or American moose that had somehow found their way to Ireland.

The earliest documented of these discoveries was in 1695 when Irish physician Thomas Molyneaux identified large antlers unearthed in Dublin as being from the elk family. The increasing regularity of finds of this kind led scientists to believe that the elk had once been abundant in Ireland.

But it wasn’t until the 19th century that the Irish Elk was named. French naturalist Georges Cuvier studied the fossils closely at his Parisian laboratory and declared that the bones, in fact, belonged to a species that no longer inhabited the world. In 1827 Joshua Brookes, named the new genus Megaloceros in a listing of his zoological collection.

Why did the Irish Elk become extinct?

There are several theories as to the reason why the Irish elk became extinct.  Until very recently it was believed to have occurred between 8,00 to 12,000 years ago, but that was before the most recent remains of the species had been carbon-dated to about 7,700 years ago in western Russia.

One possibility is that they fell victim to starvation due to the oncoming Ice Age. We know that during the Late Pleistocene period there was a reduction in forest density, meaning a lack of sufficient high-quality forage. This has already been associated with causing a decrease in the body and antler size of the Irish elk. We also know that such resource constriction may have cut female fertility rates in half.

Another popular theory is that the antlers of the male species, growing to nearly 14 feet in length, became too massive for their heads to hold. It’s believed that the sexual selection from does for stags with large antlers contributed to each generation growing larger and larger.

But this ended up being a maladaptation as the antlers became too heavy for the elk to hold up, and also encumbered them from a quick escape from predators as they would become entangled in trees.

Whilst both of these reasons would have almost certainly contributed to the decline in the Irish elk population, it’s also entirely possible that humans had a hand in their ultimate demise, due to hunting and loss of habitat.

There was a thriving trade in Irish Elk bones in the 19th century, due to the abundance of their remains in Ireland. Skeletons and skulls with attached antlers were considered prized ornaments in the homes of the wealthy. Museums and collectors all wanted a piece of the action too, and the remains became a fairly high value find!

In 1865, full skeletons might fetch £30, while particularly good heads with antlers could cost £15, with £15 being more than 30 weeks’ wages for a low skilled worker at the time.

Leeds Philosophical and Literary Society bought a full skeleton in 1847, from Glennon’s in Dublin, for £38. This specimen, discovered at Lough Gur near Limerick, is still on display at Leeds City Museum. You can find out how you can visit it HERE.

The National Museum of Ireland in Dublin is home to one of the largest and most complete collections of Irish Elk in the world.

The Irish elk skeletons are located throughout the museum and, due to their size, are pretty hard to miss.
You can find out more about how and when to visit, HERE.

Brought to you by Celtic Titles

Celtic Titles’ mission is to conserve Scotland, one square foot at a time™. By selling souvenir plots of land and titles we are funding our Nature Reserves and conservation projects. Join us and become a Lord, Lady or Laird* of Ardmore!