Celtic languages are an integral part of British and world history.

Celtic languages are an integral part of British and world history. They were once widely spoken across the UK and other parts of the world. However, in recent times, they’re not too popular at all. Here, we take a look at some of the reasons this may be, revealing all of the most up-to-date facts and figures on the topic of Celtic Languages in 2022.

Celtic Languages: In A Nutshell

Here are just a few key findings from our research:

Here are a few key findings from our survey conducted in April 2021:

How Many People in the UK and USA Can Say ‘Hello’ in These 6 Celtic Languages?

In our survey of 1,000 people in both the UK and the USA, we asked people if they can say ‘Hello’ in any of the 6 insular Celtic languages in the table below. Here are the percentages of how many people can say ‘hello’ in each language from each country: 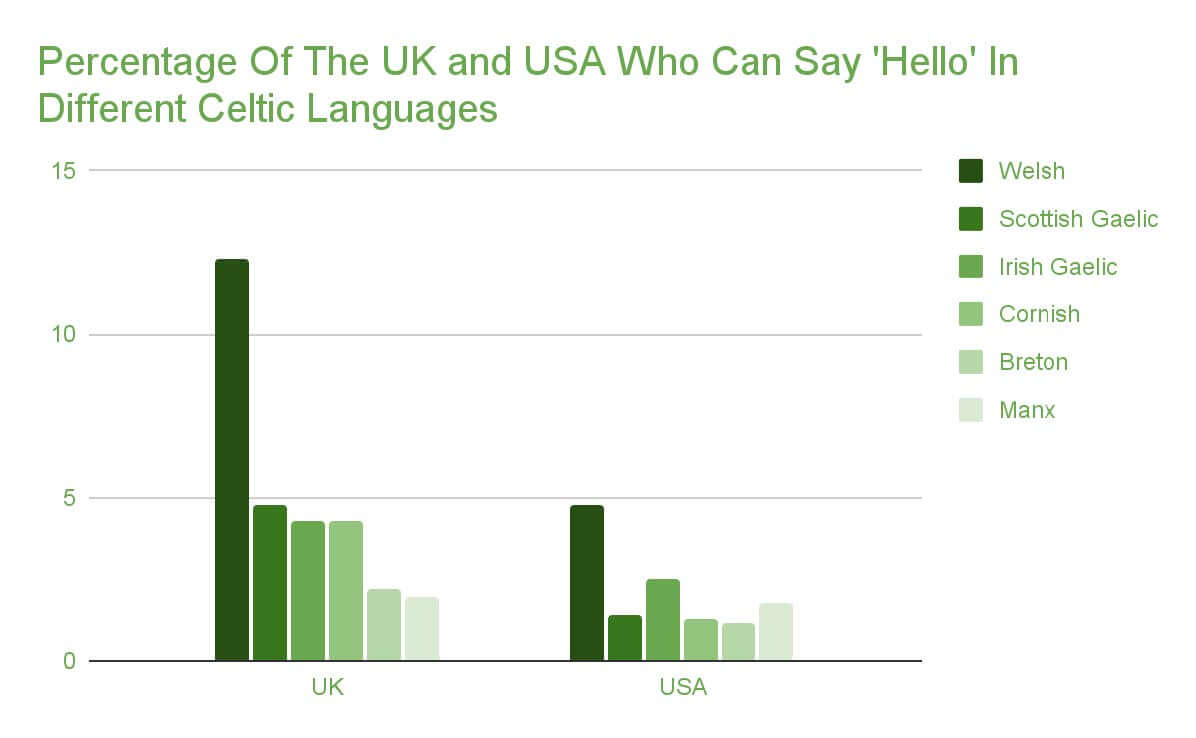 Across America, there are an average of 5,900 monthly searches for the term ‘celtic language’. The table below shows which US states search for ‘Celtic language’ the most on average each month per million people.

From this table, we can see a couple of notable things:

Here’s a summary of what we found about the Welsh language from our survey:

Interestingly, our survey also found that more people in Northern Ireland can say ‘Hello’ in Welsh than in Irish Gaelic. It’s important to bear in mind, though, that only 25 out of the 2,000 responses were from those in Northern Ireland so the sample size is fairly small.

Welsh is by far the most popular of the minority languages in the UK. In 2020, the Annual Population Survey showed that 29.1% of people aged 3 or over were able to speak Welsh. This is roughly 880,000 people. The number of Welsh speakers in Wales has increased significantly since the 2011 Census which found that there were only around 560,000 people who could speak Welsh.

This is great news because it means that the number of Welsh speaking people is increasing over the years, even continuing to increase by 0.7% since the 2019 survey.

Here’s a summary of what we found about the Scottish Gaelic language from our survey:

The 2011 Scottish Census found that:

This could show that the younger age groups are going to try to bring this beautiful language back from being near endangerment.

Here’s a summary of what we found about the Irish Gaelic language from our survey:

After looking at the 2016 Irish Census, we found the following:

This could unfortunately suggest that there is a steady decline in the language potentially casting doubts about the future of this endangered mother tongue.

On a positive note, though, the term ‘English to Irish’ has around 19,000 monthly searches on Google. This suggests that a large amount of English speakers are using the Irish language, so perhaps we’ll someday be able to bring it back to the popularity it once had.

Here’s a summary of what we found about the Cornish language from our survey:

As with other minority languages, Cornish isn’t as popular as it was in the past. There are a lot of positives with this language, though. In 2002, Cornish was actually recognised by the UK government under the European Charter for Regional or Minority Languages. The council then started to fund bilingual signage.

In 2010, it was taken off Unesco’s ‘extinct’ languages list. This was a great achievement for the people of Cornwall and others who speak the language. There are also some nurseries and schools that have started to teach Cornish.

The term ‘Cornish language’ has around 3,800 monthly searches in the UK which is significantly higher than other Celtic languages such as Manx and Breton.

Here’s a summary of what we found about the Breton language in our survey:

It was estimated that approximately 500,000 people could speak and understand Breton at the turn of the 21st Century. This is clearly bigger than other minority languages and gave a huge boost for the public opinion in the region of Brittany. This may be due to the large language-recovery movement which appeared in the area in the late 20th Century and helped Breton culturally and socially.

Surprisingly, search terms related to Breton and learning it are actually higher in the USA than in the UK. The term ‘Breton’ has an average monthly search volume of 140,000 around the globe. This is great for the language as it could be argued that it’s more well-known around the world than many of the other insular Celtic languages.

Here’s a summary of what we found about the Manx language from our survey:

The Manx language is the official language of the Isle of Man. However, in recent times, the language was declared extinct. Speakers of the language argued back against this and it was later listed as endangered.

Around 20 years ago in St Johns in the centre of the island, Bunscoill Ghaelgagh was established. Approximately 70 pupils attend this school and apart from a weekly English class, every lesson is taught in Manx. This just goes to show that many of the locals on the Isle of Man don’t want to let go of the language that forms a significant part of their identity.

All in all, some of the minority languages are unfortunately decreasing, but it does seem like there are many efforts to try and keep these languages afloat in order to create a more diverse and cultural world for future generations. We hope this roundup of all of the latest Celtic Language Statistics for 2022 has been useful and provided you with some valuable information about these powerful languages.